An Accidental Chronicler of Climate Change

I’ve been interested in disasters since my childhood. I used to watch every television show I could find about storms. I especially loved bits of footage that showed snakes coming out of their flooded lairs and swimming around in suburban backyards. My mother bought me “Disasters,” a huge book that started with the Hindenburg. Later, as an adult, I got a first-hand taste of my own disaster: A tornado hit my upstate New York property while I was there. It took down the barn I used as a welding shop. I stuck some red cowboy boots out from under the roof, which had crashed to the ground, my homage to “The Wizard of Oz,” and made a going-out-of-business card with the image. I had already decided to close my sculpture and furniture business, sell my place in Deposit, New York and start a career in photography. But before I could, I was hit by the tail end of Hurricanes Frances and Ivan. Both flooded the land and my basement. I tried to purchase flood insurance but could not since I wasn’t in a designated flood zone. One is either in a flood zone and required to carry it, or not able to get it. The zoning boundaries have not kept up with actual conditions. Climate change was already showing its destructive face in my backyard, but I hadn’t thought of these minor disasters in those terms yet. It took two years to sell my house and then a month later the area was hit with another flood making my former home uninhabitable. The new buyers never moved in. Years later they sold the property for fracking rights. My old neighborhood is now a battleground for environmental issues. 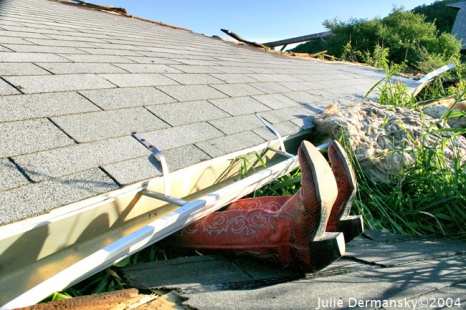 Currently I live in New Orleans where the results of rising tides, climate change and industrial disasters are never too far away to cover. As Sandy approached the northeastern seaboard, I attentively watched the storm’s track. All indications pointed to a superstorm headed for my former stomping ground. I had wrapped up coverage of Hurricane Isaac a few weeks before in Plaquemines Parish, just outside of New Orleans. I decided to wait Sandy out and drive north if the storm proved to be as destructive as predicted. When water started lapping over Manhattan’s Battery Park it was clear Sandy would be a big one. Day one post-Sandy, few images were available. I figured that could be for only two reasons: It wasn’t so bad or it was so bad the worst hit areas were inaccessible. Day three, images started to surface. I hit the road on day four, with Seaside Heights, New Jersey, as my first destination. I wanted to document the rollercoaster that had fallen into the Atlantic Ocean.

I arrived at the Tom’s River bridge that goes over to Seaside Heights on October 31st. Halloween had been officially canceled by New Jersey governor Christie. Cops blocked the bridge and directed traffic away. I pulled into a parking lot where a few people gathered under a makeshift tent to try to get information. There were a representatives from Allstate who could only offer me water and a stuffed bear dressed in an Allstate teeshirt. I spotted a man wearing a police vest talking affably to people and asked him if he could escort me to a site up ahead that served as the press hub so I could find out the situation for the next day. Things were looking bleak for me. I was told no media or anyone else would be permitted on the barrier island indefinitely. I told Vinnie Petrecca, the officer who escorted me, that I was determined to go. He was amused that I had driven up from New Orleans and would not take ‘No’ for an answer. Later that night he called and said he would take me over with him to join his team since I was the first person who made him laugh since Sandy hit. His team was from the Prosecutor’s office, tasked with documenting the area that was now considered a crime scene, and helping to evacuate the few residents who had remained. We met near the bridge the next morning. I ducked down as we drove past the checkpoint. At first his team was skeptical about having a photographer along, but they warmed up to me as I shared photo tips. They all had been shooting the storm damage on their cell phones. The damage to the island was so bad that parts of it were inaccessible. Water cut from the oceanside to the bay in Mantaloking, a town I was only able to visit six months later.

Finding gas continued to be a problem. I had purchased a five gallon gas container in North Carolina when New York friends warned me not to venture north without one. On Staten Island and the Rockaways, getting gas was still difficult. It would take a few more days before Mayor Bloomberg would issue a gas rationing solution like the one in New Jersey which shortened lengthy gas lines. Power was still out in many places including my parents’ home in Englewood, New Jersey. The first nights I stayed in a part of Tom’s River that never lost its lights before making my way to Manhattan, where full power was finally restored.

I photographed in New York’s’ Staten Island, Breezy Point, Belle harbor, The Rockaways, Union Beach, New Jersey, and Long Beach, Long Island. Everywhere I went people shared powerful, often heartbreaking stories. Many were realizing they were under-insured, others in a state of shock that their reality had been so utterly altered. Volunteers were out in force, from well-established groups like the Red Cross to random individuals pitching in any way they could. I shot for three weeks, completing my work with a job for the Sierra Club. I accompanied Sierra Club’s executive director Michael Brune and his family back to his childhood home in Chadwick, NJ where they were allowed to go for the first time since the storm. At the end of the day I returned to photograph the Seaside Heights rollercoaster before heading back home. That iconic image brought me back to a childhood memory: the “Planet of the Apes” scene of ocean waves hitting the Statue of Liberty turned on its side on a beach. For me, the rollercoaster in the water was symbolic of what is to come if we don’t reverse the effects of climate change.

I returned to the NY/NJ area just before the six-month anniversary of the storm to check on the recovery status. I went back to places I had photographed in November. Most of the debris has been cleaned up except on the Jersey shore where permits for demolition where only just being issued. In some areas things seemed to be back to normal except for the beachfront where some homes are missing and others are boarded up. Some residents have returned but overall the streets are empty except for contractors and volunteers helping out with reconstruction in the areas that were hardest hit. Food lines in the Rockaways are still the norm at the Action Center on Beach Channel Drive and the weekly free fleamaket close by. The Center’s director Aria Doe told me the need for help has increased as many find themselves unemployed in the storm’s aftermath. Carl Williams, a Christian evangelist running a newly formed community hub in Union Beach, New Jersey echoed her sentiments. People are still hurting..

Many questions are left unanswered, like where has all the Sandy aid money been distributed and where will the remaining funds go? How will these communities be rebuilt if they are to rebuilt at all?. In Staten Island’s Fox Beach the state is talking about property buyouts. In all the areas hardest hit, new standards are being set as to how high homes must be raised in order to qualify for flood insurance. Those still reeling from the storm wonder if they will be able to afford to stay.

I am left wondering if we are ready for the next wave of natural disasters. Disasters seem to come at a steadier clip and with more destructive force than ever. Though climate change naysayers in the scientific community, sponsored by the Koch brothers, have been marginalized and climate change has become accepted as fact, what if anything will change? President Obama spoke about his moral obligation to do what he can to fight climate change during his inauguration, but all signs point to policies that reflect staying the course we are already on. With hurricane season getting near again, I wonder how many storms will I cover this year?

Here is a link to a story I did for the Progressive Magazine that gets into more details about what I found while covering Sandy six months later. And here is a link to a set of pictures on flickr shot 6-month after Sandy. Also a link to my coverage of Sandy from Oct. 31 2012- Nov. 23rd 2012. 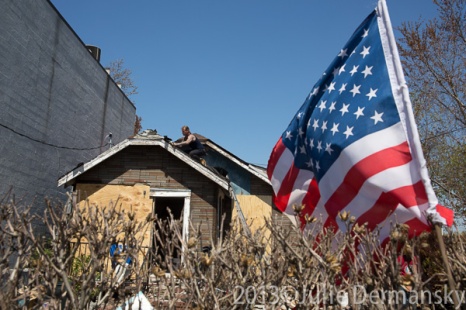 April 26, 2013, Construction on a house damaged by superstorm Sandy six months after the storm on Midland Ave. in Staten Island.

Foundations of homes in Breezy Point left where a fire bruned down 135 the night Sandy hit.

April, 26, 2013, A broken sculpture in Fox Beach, Staten Island where  a house had been pushed by Sandy’s surge . 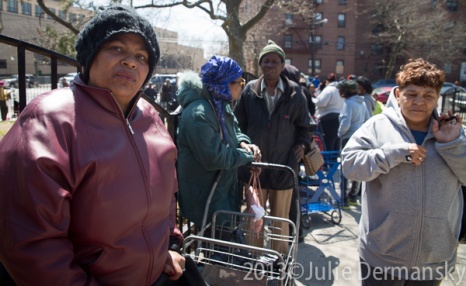 April 27th , 2013, Joni Flynn on line at the Action Center in the Rockaways where free food is given out. She has been receiving food and l supplies from the community center since Sandy.

Staten Island, April 26th, Allan Eaton, part of Occupy Sandy in front of the tent he has being staying in while assiting victims of Sandy. It is one of three tents on parks dept. land in New Dorp Beach where a hub for the community set up by a memeber of the community, Donna Graziano , has been threatend with evicition. Donna has been told neighbors want her gone. She tells me she know of 5 people against her being there, and two who are calling the mayors office endlessly.Those i spoke to in the area said the hub has been a god send for them. 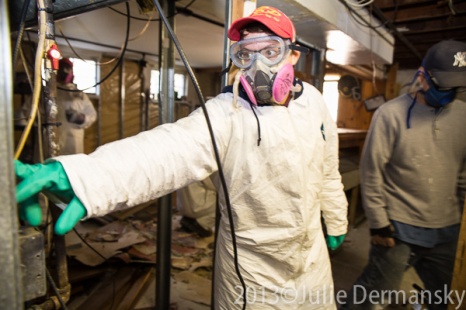 Union Beach, New Jersey, April 25th, 2103, Six months after Superstorm Sandy a statue of Christ with two American Flags stands where a house once did.

April 22, 2013, A beach front home destroyed by superstorm Sandy on the Jersey shore in Ocean Beach six month after the storm.

One thought on “An Accidental Chronicler of Climate Change”