I covered Sandy’s aftermath for most of November 2012.
Click here to see/read my images and stories on Sandy’s Aftermath.
I am gong to the New York metropolitan area from April 20-30 to do an update story on Superstorm Sandy’s aftermath. I will be revisiting areas I photographed in the weeks just after the storm hit, including the Jersey shore, the Rockaways  and Breezy Point, following up with people I met in November to see how the recovery process is going.
Ron, whose mother’s home is in Union Beach, NewJersey was taken down, has been in touch with me. His mother lived across from the iconic yellow house that seemed to stand in defiance of climate change after Sandy’s surge knocked half of it down. “It’s still a total mess here and there’s no help to be seen,” he reports. “It’s a joke how those millions of dollars were raised and nothing is funneling back to the town or the people.” How will we handle climate change, intensifying storms and rising tides? That’s a question that guides my photographic investigations.

House across from Ron’s mother’s home on Front Street 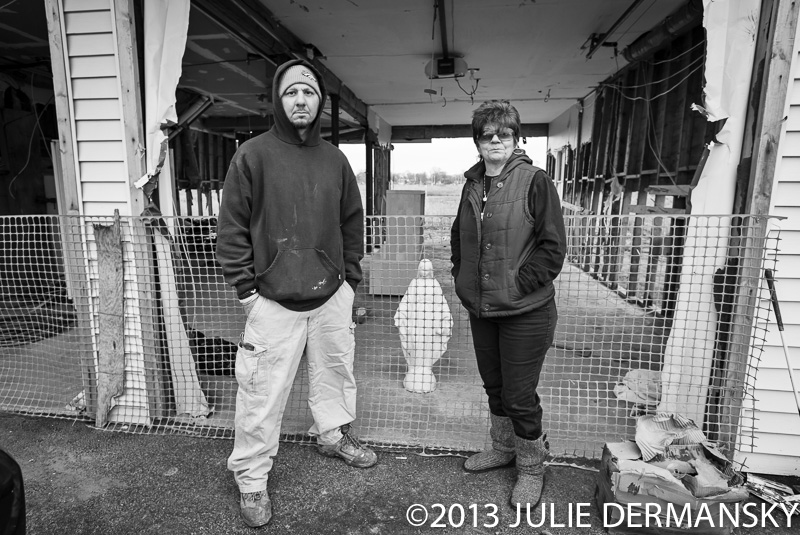 Ron and his mother in Union Beach

I will be back in touch with  those who worked with various aid organizations including  Occupy Sandy and The Action Center in the Far Rockaways. On a recent call with Aria Dove, The Action Center’s executive director, she said nothing has been learned from the lessons Hurricane Katrina taught. The Far Rockaways are New York’s 9th Ward. The area lacks social services. While some post-Sandy aid trickled in, the people still lack adequate health care. The area has been left with environmental hazards as well as economic hardship. The Action Center, which has worked in the community for 12 years, has had trouble securing funding while organizations with no track record are getting money easily. “Money goes to the organizations in the wealthiest communities, not here,” Dove told me. “Funding is barely touching the lives of the underserved–people of color and all those in low income brackets.”
Cynthia Torres lost almost everything. She and her extended family live in the Ocean Bay housing projects on the first floor. The basement was flooded and left with 12 feet of water in it for over a month. Moisture got everything in their apartment wet and moldy. Three weeks after the storm, the Actions Center was able to get her a crib so her child wouldn’t have to sleep on a moldy mattress any longer. FEMA originally rejected all of their claims, in the end the Matriarch of the family got a few thousands dollars. The family struggles, now without a car, another casualty of Sandy, limiting their mobility.

As an independent photojournalist/multi media reporter, the stories I cover are all self-assigned. I’m a Jersey girl now living in New Orleans so I took Hurricane Sandy’s devastation personally. I hit the road from New Orleans without an expense account or definite assignment. Once my stories are done I have to pitch my work without any guaranteed payback.There are fewer media outlets and those that remain pay less and less. One of my editors told me the bosses are taking fewer “David and Goliath” stories. But  what other stories are worth telling?  Many of my readers thank me for my work and share my stories.  I need financial support so I can continue.
Please contribute what you can so I can give updated Sandy recovery news. All money contributed will go to my travel expenses and for the work itself. You can email direct at Juliedermansky@yahoo.com  for information on ways to contribute or contribute via a crowd source campaign I set up with Indiegogo.
* Photos will be donated to various groups helping in the recovery effort for use on their websites and for thier own fundraising efforts. 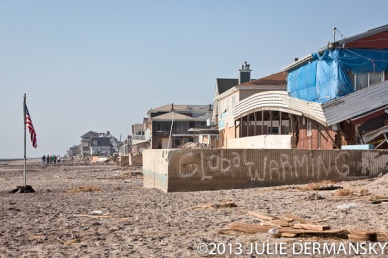 Message on the beach in Belle Harbor