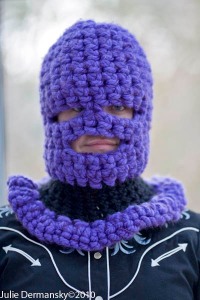 Flo McGarrell wearing one of his fiber art creations
When I first heard of the earthquake in Haiti I thought of Flo McGarrell. I knew he was there. I called his mother Ann, and I conveyed my sense that Flo would be fine, leading the rescue efforts of others. I was wrong. Despite Flo’s strength, the earthquake’s suddenness made survival more an act of luck than will. He was killed instantly on January 12th when the Peace of Mind Hotel in Jacmel collapsed. His body still remains trapped under the hotel. A friend who was with him at the hotel and the remaining members of FOSAJ, the art center Flo ran, have been unable to dig him out. The State Department may send some heavy lifting equipment to Jacmel so the body can be recovered.

One natural disaster put me on the path to meet Flo and another has taken him away. Ann McGarrell, Flo’s mother, contacted me after seeing a series of photographs I did about post–Katrina New Orleans. We collaborated on a book using photos she selected from my series and a poem she wrote inspired by my photos. This collaboration also brought Flo and James, Ann’s husband and Flo’s father, into my life. Both are fine artists of the highest caliber.

I was privileged to share a Thanksgiving with them. Flo prepared raw food concoctions that were scrumptious. That weekend I took pictures of Flo’s crocheted hats so he could enter them in a fiber-art competition. Ann, James and Flo acted as models on a cold Vermont autumn day. He talked to me about the art center in Haiti he was going to be running and invited me to visit and teach a workshop there, an offer I will always regret not having accepted sooner.

Flo was multi-talented and had a generous spirit, openly sharing ideas and help. His life and his work were interconnected. Working and living in Haiti was a synthesis of his many interests. He had started making “agrisculptures,” using plants and recycled materials to make a statement about sustainability. In Haiti, he ran the art center on a shoestring, committed to bringing the local art community in Haiti together. His optimism and positive outlook were infectious.

In a recent interview Flo said, “I have a few guiding principles, which I think must propel me toward this artistic freedom you speak about: Don’t hide, don’t lie. Do that which scares me. Resist the urge to settle. Be as many things as possible in this lifetime.” From what I know of Flo that is exactly how he lived. Flo’s commitment to these principles and his life’s work are inspirational. The randomness of his death is difficult to grasp.

On Friday, Jan. 15th I went to a banquet hall on Wall Street to photograph a benefit for FAR, the Fund for Armenian Relief, a humanitarian organization formed to aid the victims of the earthquake that hit Spitak, Armenia 25 years ago. I arrived early and followed voices I heard in the distance near the Stock Exchange. There was a rally, tying many issues together. A mishmash protest of sorts by the Bail out People Movement . The crowded chanted that Wall Street should bail out Haiti, return the riches it has stolen. Councilman Charles Barron on Brooklyn, stated the $100 million Obama pledged to Haiti amounted to $50 per person and demanded more help be given to Haiti.

At the banquet a few of the speakers mentioned Haiti, but their focus was Armenia. The evening was a reminder of how long it takes an impoverished nation to recover. I write this waiting for a flight back to New Orleans, a city still hardly better and stronger than ever, as Bush had envisioned it. It is unfortunate there is no end in sight to war. Cleaning up the wrath of nature seems task enough for the world. The earth’s moving plates know no boundaries, and when they shift, we are all equally in peril.

To Flo’s family and friends, I reiterate my deepest condolences. To everyone else, I want to share Flo’s life and work.

Protest on in NYC for more aid to Haiti

8 thoughts on “Homage to Flo McGarrell”